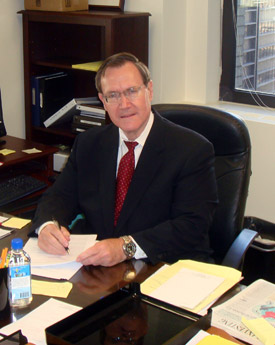 GEORGE BRUNELLE is a member of the firm with extensive background in securities litigation, arbitration, mediation, regulatory investigations, disciplinary proceedings, broker-dealer compliance and corporate governance. Mr. Brunelle graduated cum laude from Rutgers University, earned his J.D. from Brooklyn Law School in 1975, and is admitted to practice before the State Courts of New York and Pennsylvania, the U.S. District Court for the Southern District of New York, the U.S. Court of Appeals for the Second Circuit, and the U.S. Supreme Court. Previously, Mr. Brunelle was employed by the New York Stock Exchange, managing a staff of attorneys and conducting complex investigations and enforcement proceedings before the NYSE Hearing Board, the Exchange's Board of Directors, the SEC, and the U.S. Court of Appeals for the Second Circuit.  Upon leaving the NYSE, Mr. Brunelle became a partner of Goldstein & Brunelle, P.C., and in 1986, he founded Brunelle & Hadjikow, P.C.

(Each case depends upon its facts and circumstances, and past results are no guarantee of a similar outcome in the future.)

“Arbitration Forum-Selection Clauses that Do Not Include FINRA,” Securities Arbitration Commentator, Vol. 2016, No. 6 (Nov. 2016).

"The Shores Case – Expansion of the ‘Fraud on the Market Doctrine," Securities Regulation Law Journal (Winter 1982).